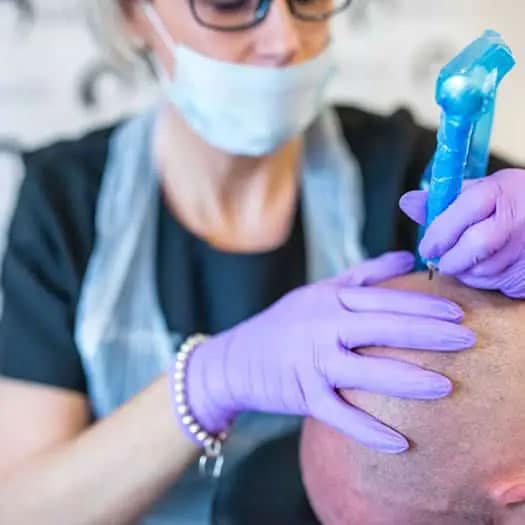 Is scalp micropigmentation safe? This question is raised frequently in each of our clinics, so we figured it was time to provide you with an answer that’s cast in cyberspace.

To give you the short version of the answer, yes, SMP is completely safe. However, delve a little and there are certain advisory cautions to adhere to to ensure the procedure is risk-free.

What is Scalp Micropigmentation and How Does it Work?

Also known by its abridged version, SMP, it is a life-changing, aesthetics treatment that disguises the devastation of hair loss. It is unlike other hair restoration solutions in that SMP does not promote new hair growth.

It is administered using a technique that is commensurate to that of tattooing. Using a machine that has been fitted with a microneedle, natural pigments are implanted underneath the skin’s outer layer, known as the Epidermis. The implanted pigment is laid out in a form of tiny dots across the scalp. The finished result is a series of imitation hair follicles which give the appearance that they are growing beneath the skin.

Are There Risk Factors With Scalp Micropigmentation?

One of the biggest risk factors linked to scalp micropigmentation has to be the fact that your skin’s barrier is broken. At any given moment, this means infections can enter the site being treated for SMP. The only way to combat this risk element is by choosing your clinic carefully. When making your decision on which practitioner is the best for you, ensure you consider the following:

Who Can Benefit From Scalp Micropigmentation Treatments?

The idea behind scalp micropigmentation is to recreate an ultimately natural hairline. This is achieved by a series of pigmented tiny dots being implanted underneath your skin, representing imitation hair follicles. The dots blend seamlessly with your actual complexion giving an incredibly life-like finish. SMP works on the following conditions :

To conclude, is scalp micropigmentation safe? Yes, but do take extreme care with the process of decision-making. Ensure your clinic is adept in the treatment process and don’t be afraid of asking questions to verify.